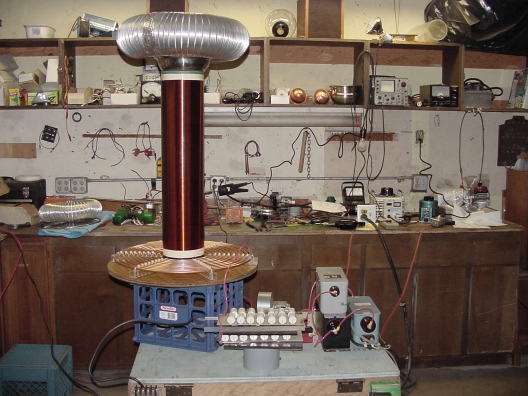 First light?  No, about third.  They say three times the charm, or three strikes and your out!  Finally after much effort, I got the power, the capacitors, and the new 6 1/2 inch coil tuned up... AND UP!  You say you want the story?  Well, if you insist.

The thing I gotta remember is, it all has to tune and work together.  When I first lit the six incher with the new primary, I was sloppy, and paid for it!  It was connected to the same power supply as the 4 incher, and seemed anemic.  Anemic?  Not enough iron in the power supply... he he heh.  But, then, I saw light, like a bulb? inside the coil!  Yes, light from inside the secondary cannot be good.  It wasn't.  The secondary ground connection was left too long and had folded up to lay against the inside wall, up about four inches.  Far enough to arc nicely to the surface, and burn a carbon trail up the inside!  Oh feces!  The carbon trail was dark, and deep and would not wash off.  Wire wheel, and for deep spots a Dremel.  Soon I had it fired up again.  Shorter ground wire inside.  Seemed to run well.  No more streamer length than the 4" coil, but with the same power and caps, it was what I expected.  The coil seemed tame and tuned, but not spectacular.  I showed it a few times, maybe runtime of thirty minutes total.  When I went down to ten Geek Caps, it was better, but I blew another capacitor!  OK, I can take the hint.  Running a 20 kv string on 15kv NSTs, overpowered at 150 volts is not working.  They really get warm to hot, and that's in ambient 50 degrees.  Perhaps the MMC chart at GG is not rated for variac drive!  So I ran it at twelve caps for a while.  It seemed tame and ran well.

The Heartbreaker...  So I guess you can't be too careful.  Check and recheck wiring!  Don't ASSUME!  Many mistakes in a very short time.  When I acquired two more NSTs, I put together a string of remaining eight caps on a board.  linked this to the six cap board, and voila, another fourteen capacitor array.  Two 14 capacitor arrays!  Now we's talkin!  So I immediately hook up the parallel capacitor arrays, and fire it up.  Just two NSTs, but I was anxious.  I lit it with the variac in the circuit turned up all the way.  It growled way low, like a bad tune, but worse yet, the base sparked to the primary occasionally.  I turned down the variac, and shot again.  OK no primary to secondary arcs, that's good.  Not much breakout, and a small sharp toroid?  Should be more... What's that flicker  -- Oh no, more fecal matter!  It looks like a 1/8 inch or less horizontal racing arc, but in one spot, getting hot.  Woe is me.  No ozone, and one of the twins is dead, or so it appears.  But why?  Was I that out of tune, or was I overcoupled, or just plain stupid?  I settled on stupid, and left the lab for the warmth of home.  Back to the Pupman List.  There must be something about pri-sec arcs...  Check the coiler sites, the urls I saved so carefully for research like this.  I decided the pri-sec were too close, and I was way out of tune. It turned out, I was wrong.  I had ground problems that I wouldn't find until much later.

The REAL Problem !!  So I figured the laws of physics are on my side.  A whole bunch of guys got similiar components to make big SparX in the right places,  so can I.  I fab a piece of 3/4" thick plastic to raise the base of the secondary three quarters of an inch.  Looks better.  So, now, I take the undamaged twin secondary and erect it.  Still only two NSTs, but this time I put on a bigger topload.  A quick light, and, no pri-sec sparks.  Cool.  Even at 150 volts, no unwanted sparks, so far so good.  Breakout looks good with the 6" X 20ish toroid breakout point.  So it seems to have cured the pri-sec problems. Or so I assumed...  Now we add the third NST.  Alright, so I had to phase them all together properly first.  Now all three, and voila, we got SparX!  Good SparX.  A couple of feet, but hotter than before.  A little tuning, yes more primary and she sings. Nice breakout point streamers and arcs.  So I'm busy being pleased with myself, when I notice the grounded Jesus stick on the floor is sparking.  Quite well.  Wow.  I guessed the 7 or 8 feet of #4 copper that goes to the girder has enough inductance in it to leave some potential at this much power.  (I guessed wrong)  So, I unrolled some copper strap, about 4 foot by 4inches, and connected it to the ground, along with the girder ground.  Snap, she tuned up lots better!  Nice arcs to the fixtures, and the fluorescent lamp was catching arcs, and showing multiple colors!  Little corona around the ground plane/electrode on the concrete floor.  I rolled the coil around for better positioning, and then I felt IT!   The ground lead, wasn't grounded!  OH This explains so much!  Now things made sense.  The lug had loosened, and the ground was intermittent!

Success and Cigars all around!OK, again we try it, and major KEWL.  Great arcs to ceiling and the grounded fixture.  Hot white streamers all over.  Lord, they were even working through the hole into the attic.  Whoo hoo.  Quite impressive, I must say! Well, Hell, no way I can keep running this in the lab... gotta go to the shop.   So 3 and 4 foot arcs, and longer streamers were the result.  It tuned well in the lab, and even better out in the shop with 18 foot ceilings.  No, not even one, primary strikes or pri-sec sparking.  It did just what it was supposed to do, and no fires or extra sparks.  What a hoot. 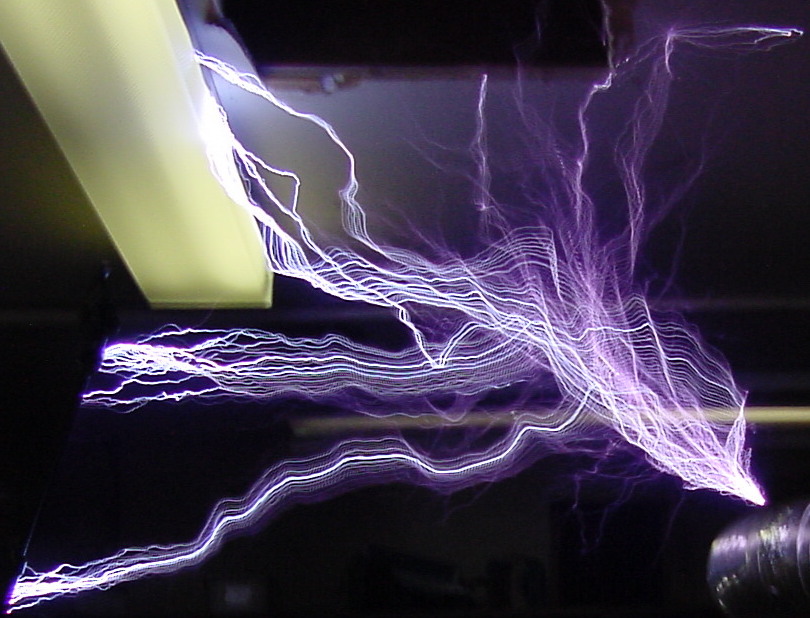 First light with the new NSTs.  See the multiple hot strikes to the ceiling and the ground rod on the left.  Thanks to Neon guy Ralph, I got some more 15/30 NSTs.  I now have three connected, and one more I will add soon.  Grateful SparX from the new 6 1/2 inch coil finally. 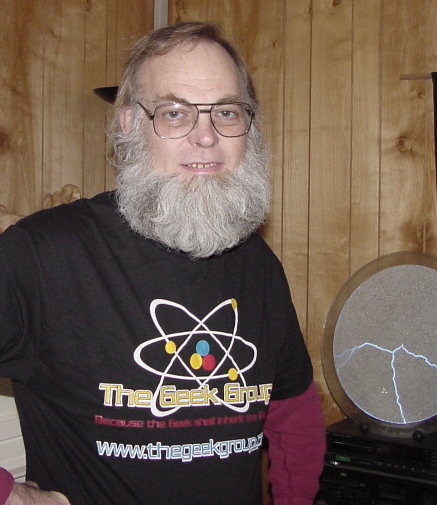 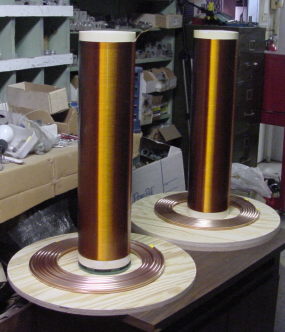 Justin Hays sold me a couple of nice 6" coils.  Now I have to build them out.  So, I have to make my first flat primary.  First we buy more stuff. 24" plywood rounds, 3/8 tubing, and some 1" box plastic extrusion.  Then I take a lesson from Greg's Garage, and used tyrap fabrication, but with a twist.  I found the box extrusion to be easier?  than the round pvc for spacers.  So I drill a bunch of holes, and then set up six radials, staggered for the spiral.  Then we stain the plywood base, a nice touch.  And then, the wind and tie off.    The mount for the coil is a six inch drain grate, upside down.  The pictures are self explanatory.  The inside and outside tyraps go clear through the wood, to secure it all to the base.  This elimnates screws for that mount.  The tyraps were bent like a sailmaker's needle and threaded through and tied.  Ten turns should do the trick, I hope. 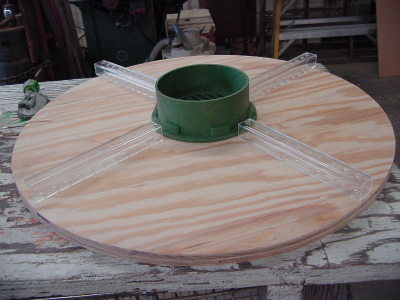 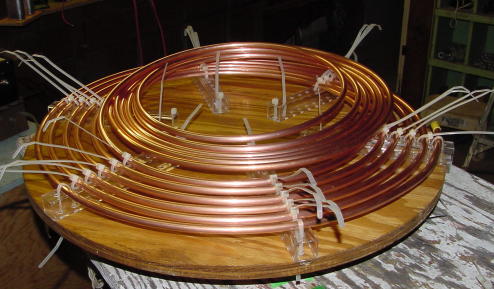 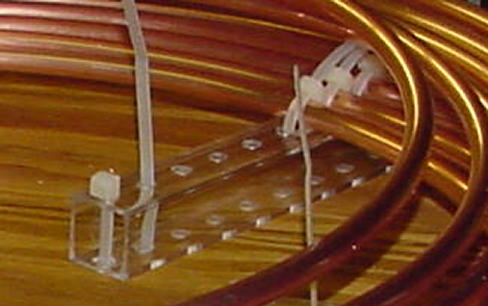 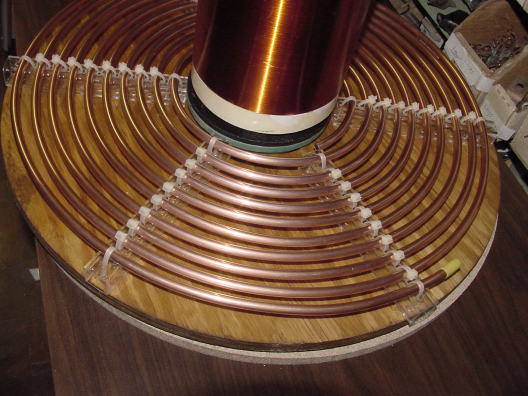 Hey - There is my first flat primary!  Not too shabby, but we got more work to make the Twin 6's play, or even one of them.. To celebrate my wind, I thought I would make a few runs with the old coil.  That's when ---

I knew they were running hot, and I thought they were REALLY working hard.  They were, when they stopped!

It was a 10 cap string, .015 ufd @ 20kv, or so they said.  So, I was not that surprised when I saw the failure.  Yep, there was no streamers all of a sudden, and a hot little arc sounded and shone brightly at the resistor across the failed capacitor.  The meter verified the failure, less than a tenth of  a nanofarad, and the rest of the string was fine.  It seemed to have opened up nicely... Of course at the time I was running the NSTs at 150 volts, developing nice 24" streamers.  Maybe I should make a bigger capacitor array, or tune tighter.

OK, so I blew my SECOND Geek Cap!

You shouldn't run a 20 kvdc rated string at 20+ + + kv ac!  I got it down now.  The second one let loose the same way.  Ten cap string on a pair of 15/30 NSTs.  Although there are 14 caps shown, note the taps at eight, ten, and fourteen.  This gives me nice range of capacitance to tune with, but I have to watch runnning them so hard.  The laws of physics apply to me, too! 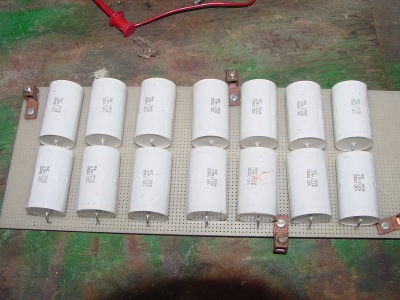 The last in the 10 string tap, left of the lower tap point.  They were all being cooled by the exhaust off the gap, but that one was not in the flow.  Repairs should be quick and easy.  More exact data to come, but I worked it to death, basically.

Yes, here's the data for the files...

So, we learn about MOT's, or Microwave Oven Transformers!  I hooked up two twins that I salvaged from a twin magnetron oven.  I used roughly (perhaps too roughly) Greg Hunter's circuit.  First, though, I had to test the transformers.  I always liked the term breadboard.  Yep, I'm an old guy, and I built all kinds of things on wood. 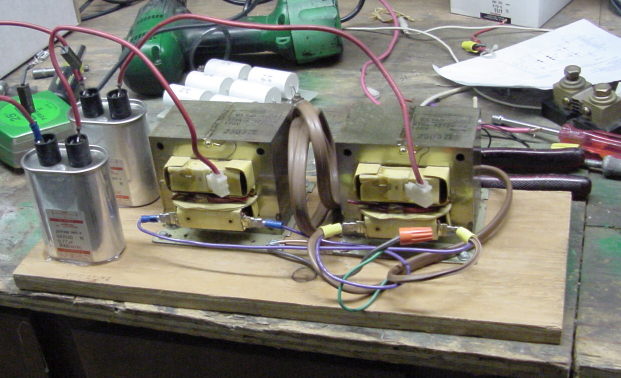 So, I power these guys up, and they draw about 7or 8 amps, justa idling.  Having worked with NST's only in the past, I tried to draw an arc.  No close starts, I had to touch them to the case to start an arc.  But what an arc!  The arcs only were to the case, though... Hmmmm.  No arcs from the ungrounded HV when I touched them together... Duh !!  I swapped the primary connections on one, to throw it out of phase, and voila!  Plenty of juice now.  I plugged them into my coil, and was not surprised to see -- Nothing!  No bang, the gap wouldn't fire.  So I go to a single gap, and get some spark.  Man, it was tight sounding, with only about two inches when I forced an arc with the ground.   I then subtracted capacitance, by adding capacitors.  Wrong, once I thought it through.  The 1200 ohm 100 w isolation resistors I used were way hot, too hot to touch!  OK, so I gotta get some smaller resistors.  MOT's are coming back soon, with better results. 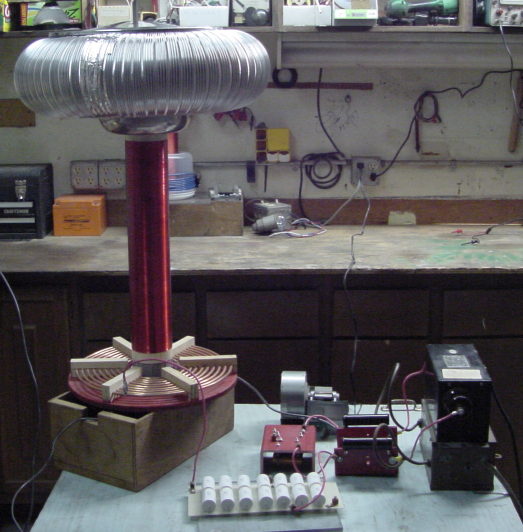 Mean while, back at the NST supply, I thought I would try for a new level of power, and ran two, count em' TWO 15kv 30ma in parallel.  This was very satisfying.  I took the capacitor up to .015 from .0094 that had ran well with one 15/30.  I increased the top load to the 6" duct, and was tuning to 28" white hot streamers.  A savage and probing arc erupts from a break out point! 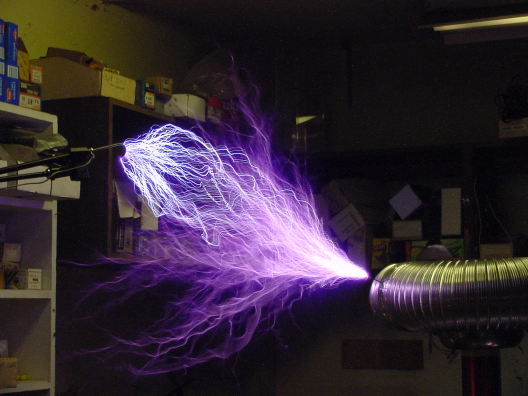 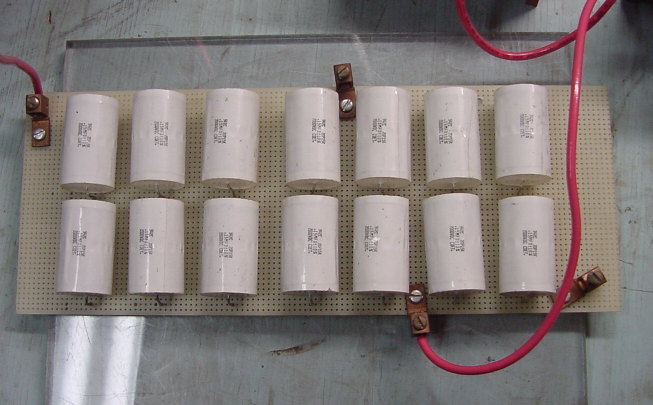 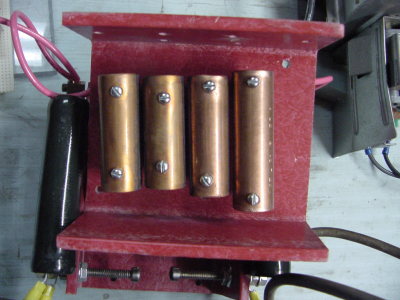 So, it ain't pretty, but with a little blower across it, the loss is low!  This was "just temporary"
when it only had two electrodes.  I just added on as I upped the coils power.  Seems to work much
better than it looks.  The blower was salvage from a microwave.  I forgot to plug it in, and wondered
what happened to the streamer length!  The quench was adding 4 or 5 inches when the blower was
operating. 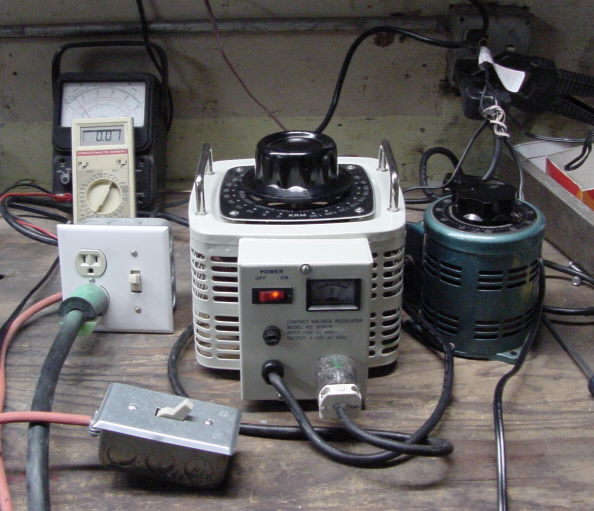 The big variac, $95 from HSC, is nice for overpowering these NSTs.  With the old black Simpson 260 reading volts, and the digital showing current this lash up works for testing.... 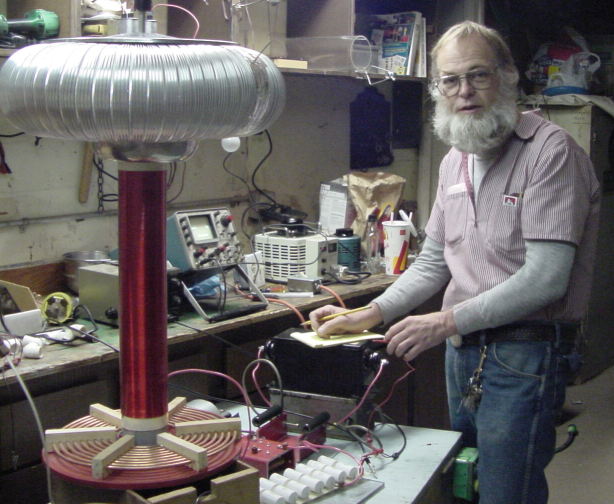 The Old Coiler, Jack SparX er uh, John Dyer, at work in the Lab...  He threatens to build a real coil instead of all these tests, but we ain't seen a permanent one yet.

To meet the man behind the legend,
or to email me, go to
JohnDyer.com